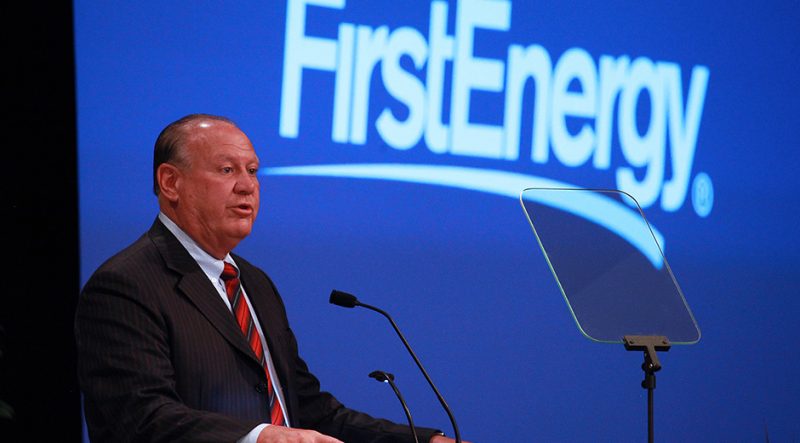 “As many of you may well know the past few years have been transformational for FirstEnergy and we’ve made significant accomplishments so far this year,” said Jones during a Nov. 13 presentation to investors at the Edison Electric Institute (EEI) Financial Conference held in San Francisco. “This has been a busy and productive year.”

With $39 billion in total assets as of Sept. 30, Jones added that FirstEnergy’s three transmission subsidiaries operate more than 24,000 miles of lines that connect the Midwest and Mid-Atlantic regions, noting that in West Virginia, “the only vertically integrated state in which we operate, our utility operations include 3,800 megawatts (MW) of regulated generation assets.”

“We say it often and we stand behind it: we believe that our six million customers are our most valuable assets and we’re proud to have low average bills in our states while posting strong, reliable utility performance against our targets,” said Jones. “Over the past several years, we have transformed FirstEnergy into a fully regulated utility focused on stable, predictable and customer-service-oriented growth.”

Jones outlined FirstEnergy’s financial achievements for 2018 as part of his presentation to investors updating them on the company’s key objectives and expectations for 2019.

Overall, the company’s achievements this year have included several advancements in FirstEnergy’s regulated growth plan — such as a new organizational structure, billions in an equity infusion, upgraded credit ratings, and submission of a state infrastructure investment plan, among others.

In January, for instance, FirstEnergy received $2.5 billion in equity from four private investment groups to hasten the company’s transition to a fully regulated utility company, Jones said. Proceeds of the private offering will be used to reduce FirstEnergy’s holding company debt, contribute to its pension fund, and will strengthen the company’s investment-grade balance sheet, he said.

The investment also will enable the company to speed up its growth and infrastructure improvement plans for FirstEnergy’s transmission and distribution businesses, said Jones.

“The January equity investment allowed us to strengthen our balance sheet, facilitate an accelerated CAPX plan, and help drive our regulated growth,” said Jones on Tuesday, adding that the investment also served as a catalyst for publication in February of the company’s 2018-2021 Unlocking the Future financial guidance.

Other regulated growth plan progress achieved by FirstEnergy this year, according to Jones, included filing a Reliability Plus infrastructure investment plan for its Jersey Central Power & Light (JCP&L), which serves 1.1 million customers in central and northern New Jersey.

Filed in July with the New Jersey Board of Public Utilities (BPU), the estimated $400 million JCP&L plan would pay for roughly 4,000 upgrades concentrated on four areas: overhead circuit reliability and resiliency, substation reliability enhancement, distribution automation, and underground system improvements. The total estimated cost of the improvements would come from a 26-cents per month increase per residential user, followed by subsequent increases every six months, according to company documents, with a cap at $1.66 by the end of the four-year project.

If approved by the BPU, Jones said the New Jersey investment infrastructure plan also will include analyzing environmentally friendly investments, such as for electric vehicles and community solar programs, among others.

In other news related to FirstEnergy’s regulated growth plan, the company in August filed a Maryland distribution rate case and in September announced a new organizational structure that Jones said is “designed to properly align our corporate costs and systems to efficiently support our fully regulated operations going forward.”

And this month, FirstEnergy reached an agreement with the Public Utilities Commission of Ohio (PUCO) on its distribution platform modernization plan, which will support grid modernization that Jones said is consistent with PUCO’s Power Forward initiative.

“This will be just over a $500 million investment over a three-year period,” he said, adding that the settlement includes resolution of the federal Tax Cuts and Jobs Act proceeding in the state, “which means we now address tax reform to the benefit of customers in all of our jurisdictions.”

The Environmental Defense Fund contributed to FirstEnergy’s grid modernization plan, which is slated to provide numerous customer benefits, such as more access to energy-use data, an efficiency enhanced grid and lower residential bills — all resulting from decreased operational costs the company will realize from installing 700,000 new smart meters, said Jones, who noted that the plan now awaits approval by the PUCO.

As part of its equity infusion, FirstEnergy in January also agreed to form a restructuring working group aimed at maximizing value and certainty to the company while minimizing the length of time it may take for the company to exit competitive generation. FirstEnergy announced its plans to leave competitive generation in November 2016 due to dim power prices, inadequate results from capacity auctions, and poor demand forecasts.

Members of FirstEnergy’s restructuring working group also are advising company management on the FES bankruptcy filed on March 31, a few days after announcing it would close four nuclear units in its Ohio and Pennsylvania region between 2020 and 2021.

The plant closings are subject to reliability impact review by PJM Interconnection LLC, one of the nation’s regional transmission organizations (RTO) that coordinates electricity movement in 13 East Coast states and the District of Columbia.

In a related move, FES also asked the U.S. Department of Energy (DOE) to issue an emergency order to protect it from a reliability threat it said the regional market faced that was being caused by the premature and accelerating retirement of coal and nuclear generation plants.

Specifically, FES filed an application with the DOE seeking an emergency order under Section 202(c) of the Federal Power Act, which authorizes the U.S. Energy Secretary to order temporary connections of facilities and generation, delivery, interchange, or transmission of power to mitigate a power emergency.

“The time for talk is over. We find ourselves at a crisis point where significant baseload generation will cease to exist in RTO markets without quick and decisive intervention,” FES counsels wrote in the March 29 filing, which also sought “to ensure that nuclear and coal-fired generators operating within PJM are compensated fairly for their costs and the benefits they provide.”

Meanwhile, PJM has refuted the claims made by FES.

Jones said yesterday that he continues “to believe that our country is heading into a difficult place if we allow nuclear plants that are perfectly good and coal plants that are needed for resiliency in the winter to continue to close prematurely.”

“The Department of Energy has studied this issue for years,” he said. “They’re very concerned. I don’t think they’ve quit worrying about this issue and I think they’re going to continue to look for solutions that make sense for our country.”

Regarding what later this year became a combined FES/FENOC bankruptcy filing, Jones said the U.S. Bankruptcy Court in the Northern District of Ohio on Sept. 25 approved a definitive settlement agreement between FES/FENOC and its creditors, creating what is “perhaps the most important milestone” in FirstEnergy’s exit from competitive generation.

This week, he said, “Solving this situation in four months is a remarkable achievement.”

Jones also pointed out that FirstEnergy’s credit rating went up in late August following the bankruptcy settlement agreement filing and rose again in November after the bankruptcy court approved the agreement.

“Needless to say we got a lot done this year and I’m happy to say that for the first time since becoming CEO, I can enter the new year with a renewed focus on what I know best: running a regulated transmission and distribution company and executing our regulated growth strategy,” Jones said.