Infrastructure package opens door to next phase of EV expansion »

Published on November 08, 2021 by Dave Kovaleski 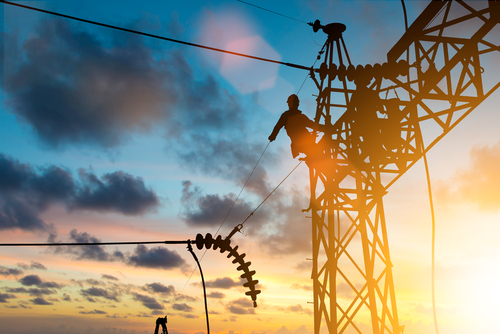 The passage by Congress of a $1.2 trillion bipartisan infrastructure bill late Friday, which features the largest investment in clean energy transmission and the electric grid in U.S. history, drew widespread support from the energy and utilities industries.

The Infrastructure Investment and Jobs Act was sent to President Joe Biden to be signed into law after the U.S. House of Representatives approved the bill late Friday. The legislation includes $65 billion for clean energy transmission and to upgrade the grid and power infrastructure. That funding will go toward building thousands of miles of new transmission lines to facilitate the expansion of renewables and clean energy, as well as clean energy technologies to accelerate the transition to a zero-emission economy.

“The bipartisan support for large scale regional and interregional transmission sends a strong message to the industry and its regulators to get busy planning, permitting, and paying for new and expanded lines, and provides a wide variety of support in each of those areas,” Rob Gramlich, president of Grid Strategies, said.

Further, it includes $50 billion to protect against droughts, heat, floods and wildfires, along with a major investment in weatherization. In addition, $21 billion is set aside to clean up Superfund and brownfield sites, reclaim abandoned mine land and cap orphaned oil and gas wells.

Also, the legislation will invest $7.5 billion to build out a national network of electric vehicle (EV) chargers to support Biden’s goal of building a nationwide network of 500,000 EV chargers to accelerate the adoption of EVs.

“On behalf of America’s investor-owned electric companies, EEI congratulates Congress for passing a broad, bipartisan infrastructure bill that will make significant investments in the critical energy infrastructure and new carbon-free technologies our industry needs to deliver a 100-percent clean energy future to the customers and communities we serve,” said Tom Kuhn, president of the Edison Electric Institute (EEI), an organization that represents U.S. investor-owned electric companies.

“This legislation also provides an important down payment on the electric vehicle charging infrastructure and low/no-emission buses that will help to accelerate the electrification of the transportation sector, which currently is the largest source of carbon emissions in the U.S. economy. “Customers and communities across the country also will benefit from this legislation’s support for investments in middle-mile broadband infrastructure, which will help to bridge the digital divide for underserved and unserved areas.”

As Kuhn noted, the bill includes a $65 billion investment in broadband infrastructure deployment.

The National Rural Electric Cooperative Association (NRECA) also came out in support of the bill, particularly the funding for EV infrastructure and broadband.

“This bipartisan bill provides a significant down payment toward meeting critical needs of electric cooperatives and the communities we serve, including funding for priorities such as broadband deployment and electric vehicle charging,” NRECA CEO Jim Matheson said. “This bill recognizes the need to expand these two technologies in rural communities. As policymakers plan for a future that depends on electricity to drive the economy, more work will be needed to build on the groundwork laid by this legislation.”

The American Gas Association (AGA) applauded the infrastructure bill for its benefits to natural gas customers.

Karen Harbert, AGA president and CEO, said, “This infrastructure package will expand our industry’s ability to make sure all customers continue to have access to safe, reliable and affordable energy while reducing emissions.”

The AGA highlighted some of the key provisions, such as funds for energy efficiency; hydrogen research and development; grants for charging and fueling infrastructure; cybersecurity for the energy sector; enhanced grid security; and an additional $500 million over five years for the Low Income Home Energy Assistance Program (LIHEAP).

Further, clean energy groups, including the American Clean Power Association and the Alliance to Save Energy, both commended Congress for the passage of the bill.

“While at times the Washington gridlock can feel insurmountable, today’s votes show that Congress still has the keys. This is a moment to celebrate: lawmakers saying ‘yes’ to a more efficient energy future, ‘yes’ to a more consumer-friendly energy system, and ‘yes’ to a robust clean energy workforce,” Alliance to Save Energy President Paula Glover said.

The focus of energy organizations now turned to the need for Congress to approve the $1.75 trillion Build Back Better Act, which includes $555 billion to fight climate change.

The House advanced the Build Back Better Act through a procedural vote on Friday and it is expected to come to a full floor vote soon.

Heather Zichal, CEO of the American Clean Power Association, said, “With over 415,000 Americans already working in wind, solar and energy storage across America, the Build Back Better Act investment in infrastructure will continue the rapid growth of job creating clean energy projects and help meet our emissions reduction targets.

EEI, which supports the robust clean energy tax package that is included in the Build Back Better Act, the group said it has “significant concerns” with the inclusion of a 15-percent corporate minimum tax on book income in the plan.

“The adoption of a book minimum tax on electric companies would impede the deployment of clean energy, cost billions of dollars in lost investment, and result in the loss of thousands of jobs, while raising the costs of the clean energy transition for customers,” EEI said.

Infrastructure package opens door to next phase of EV expansion »