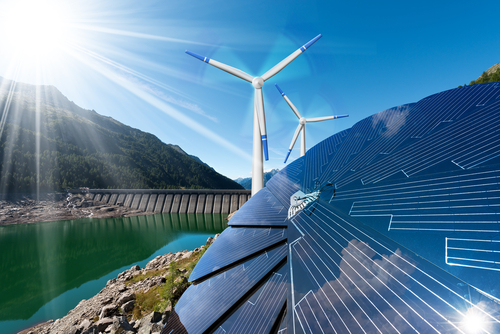 The 2.5 percent bump in carbon dioxide (CO2) emissions over 2017 levels was due more to the industrial and transportation sectors than it was to power generation, which saw a 0.6 percent increase in CO2 at the same time the nation’s electricity demand jumped 2.2 percent.

Produced for the Business Council for Sustainable Energy by Bloomberg New Energy Finance, the factbook provides market information on the U.S. energy industry, including energy efficiency, natural gas and the renewable energy sectors.

The increasing availability of renewables – solar, wind, and hydroelectric power – coupled with plentiful natural gas contributed to remarkably stable prices for electricity and gas during a year that saw more at work and, when at home, reaching for the thermostat during brutal winter cold and sizzling summer temperatures.

“CO2 emissions are tied to economic growth and extreme weather, and they would have been significantly higher last year if not for natural gas,” said Dave McCurdy, president and CEO of the American Gas Association, who spoke at a briefing following the release of the report along with other energy industry leaders. He added that 2018 was a record year for both the production and the consumption of gas in the United States.

Total climate emissions in 2018, however, remained 10 percent below the 2005 level. The Paris Accords, which the Trump administration abandoned, had the United States shooting for a 26 percent reduction from 2005 levels by the year 2025.

At the same time, the U.S. economy grew at an annualized GDP expansion rate of 2.9 percent in 2018, its fastest rate in five years. And for the first time in several years, energy consumption outpaced GDP with a 3.3 percent increase. Fortunately for consumers, there was not much of a corresponding increase in retail prices. The Factbook researchers determined that U.S. households spent near-record lows of 1.3 percent of their income on electricity and 0.4 percent for natural gas. In some regions of the country, income percentages earmarked for gas and electric bills were actually flat or declined.

On the downside, transportation was a more worrisome topic. Although an 18 percent drop in the price of lithium-ion batteries helped spur a jump in sales of electric vehicles late in the year, most American car buyers opted for larger gasoline-powered vehicles. At the same time, fuel efficiency in 2017 (the most-recent statistical year available) remained flat.

The all-American car was seen by the panel as part of some overall uncertainty in Washington about future progress on emissions and climate change. The Trump administration pulled the United States out of the landmark Paris Accords in 2017 and last year announced a roll-back of the Corporate Average Fuel Economy (CAFE) from a goal of 54.5 miles per gallon by 2025 to 37 mpg.

“The efforts around relaxing CAFE standards may be the most significant anti-climate move by this administration, even more than Paris,” said Ethan Zindler, Head of Americas at Bloomberg New Energy Finance.

The administration has also complicated the growth of renewables with a tariff on solar panels made in China, which cut into U.S. solar installations in the early months of last year, along with new uncertainty about favorable tax policies that the industry currently enjoys.

However, the panelists looked forward to continuing overall sunny days and tailwinds for renewables. “I am optimistic we are getting to the point where we will have a bipartisan agreement that cutting emissions is a good thing,” said Abigail Ross Hopper, president and CEO of the Solar Energy Industries Association.

The panelists indicated that growing consumer demand and commitment from the business community, along with state and local governments, had created momentum that would not be stopped. Solar panel prices continue to fall regardless of tariffs, and a skilled workforce of green-power manufacturers, installers and technicians is becoming established.

Much of the unfinished business for renewables, they said, was largely related to transmission capacity, licensing red tape and rulemaking rather than developing new technologies. “Onshore wind is the cheapest form of unsubsidized energy, and offshore is really taking off and seeing a dramatic reduction of costs,” said Tom Kiernan, CEO of the American Wind Energy Association. “For wind power at least, we don’t need a big tech breakthrough; it’s here now.”