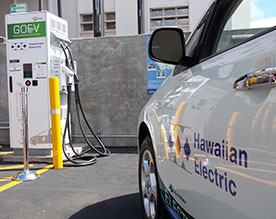 Hawaiian Electric Companies are working to encourage Hawaii residents to embrace electric vehicles (EV), in part, by focusing a new study on where best to locate an expanded public charging network on the islands.

“Our goal is to be strategic in locating DC fast chargers across our five-island service territory, emphasizing remote and low-income areas where private companies might not want to site chargers,” said Peter Rosegg, senior spokesman at Hawaiian Electric Company. “We also are siting in dense population areas with a lot of high-rises and town houses to serve EV drivers who cannot charge in a single-family home garage. Honolulu has a higher than average percentage of such residents, including a higher than average percentage of renters in all classes of housing.”

To study charging in remote areas, the utility launched the Moloka‘i EV Mobility Pilot in February, “a model for spreading benefits of electric transportation beyond urban or heavily populated areas.” Molokai is a small, rural island with a population of around 7,350 people, served by Maui Electric Company.

1. Work with automakers, dealerships, and advocates to boost EV adoptions;
2. Build out the charging infrastructure, especially in multifamily housing and workplaces;
3. Support bus operators to transition to electric vehicles;
4. Leverage demand response programs to incentivize EV owners;
5. Coordinate and plan for grid modernization and integration of renewable energy to ensure a smooth transition into EV adoption.

Despite a typical commute on the five Hawaiian islands being less than 30 miles, Hawaii residents are not immune to “range anxiety” — and a public charging option could help alleviate that, according to the utility. Public charging would also be useful for residents of townhouses, apartments, and condos on the islands.

The goal of the study was to help Hawaiian Electric better understand its future requests to the PUC, as well as providing a structure for a pilot program for charging infrastructure in businesses and multifamily housing. The utility is also looking for insight on expanding its Direct Current Fast Charger program.

Hawaiian Electric’s pilot program for fast charging has grown to 17 DC fast chargers, but the company is allowed by the PUC to operate up to 25. The utility hopes the study will reaffirm the need for fast chargers in high-density cities like Honolulu.

To increase EV usage by bus operators, Hawaiian Electric is working to help reduce the upfront costs of electric vehicle investment as well as ongoing charging.

“Under Hawaiian Electric Companies’ Electrification of Transportation program, we formed an e-Bus working group to support private companies, counties and the state in electrifying their bus fleets, including eventually school buses,” said Rosegg. “Each of the three counties now has plans to begin adding electric buses to their fleets.”

Rosegg cited JTB Hawaii, who is to be honored as the first private company to add electric buses to its visitor industry fleet. The company has three Proterra models, and “others are following their example.”

“We formed and help lead a consortium called Drive Electric Hawaii to promote EV uptake and are working with many others through that group,” Rosegg added, “which includes leading environmental groups, the State Energy Office, and others in Hawai‘i.”

Another piece of the EV puzzle is creating demand response programs for EV owners across the islands. Hawaiian Electric has a legacy demand response (DR) program, Energy Scout, with more than 30,000 subscribers. The program allows a monthly credit for subscribers who allow the utility to turn off their electric water heaters and or split air conditioners for short periods, as needed.

“Our current DR programs are in the early stages as we build out our DR Management System software,” Rosegg said. “We have run some pilot DR programs with electric vehicle customers and they are informing our current developments.”

Hawaiian Electric Companies are working with both public and private entities to increase awareness for EV adoption across the state, which was the first state in the country to establish a 100 percent renewable energy portfolio standard for electricity generation.

“An expanded public EV charging program will provide security and access to more sites for the increasing number of EV drivers,” said Jimmy Yao, Hawaiian Electric acting director of electrification of transportation. “As we increase renewables, it’s essential to our clean energy future to reduce the largest use of fossil fuel in our state, which is transportation.”