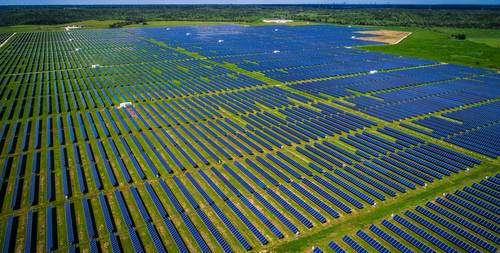 The Holstein Solar Project was acquired from 8minute Solar Energy, which led its development and handled many of its other aspects: the EPC, operation and maintenance, hedge, tax equity, and debt counterparties alike. It represents the fourth solar generation facility Duke Energy Renewables has launched in Texas.

The company is a non-regulated unit of Duke Energy, currently operating capacity of 3,000 MW of wind and solar facilities throughout the United States.

“Texas is one of the fastest-growing solar energy markets in the country,” Chris Fallon, president of Duke Energy Renewables, said. “Holstein Solar supports the state’s growth and is a great addition to our growing Texas solar energy portfolio. We’re pleased to support the state’s expanding renewable energy industry by providing low-cost, clean energy resources to meet the growing needs of Texans.”

Holstein is anchored in Nolan County, Texas, and consists of more than 709,000 solar panels spread over approximately 1,300 acres. Other solar facilities in the state include the already completed 100-MWac Lapetus Solar project in Andrews County and a project still under construction: the 200-MWac Rambler Solar in Tom Green County. In the case of Holstein, much of the power produced will be sold through a 12-year term hedge agreement to the Goldman Sachs subsidiary, J. Aron & Company LLC.

“We are changing the energy game in Texas. Holstein proves that in Texas, where cost is the top consideration, solar is a smart and reliable choice,” Dr. Tom Buttgenbach, president and CEO of 8minute Solar Energy, said. “We are proud to partner with Duke Energy Renewables on large-scale solar projects that now fulfill the promise of a future where energy is clean, abundant, and affordable for all.”