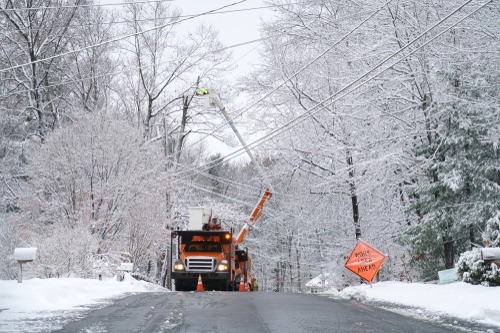 A major winter storm forced a series of rolling power outages in chilly Texas on President’s Day along with warnings that potential freezing rain and heavy snow could lead to downed power lines in states to the east.

The outages, which began early in the morning on Monday, had been expected to last no more than 45 minutes; However, the Electric Reliability Council of Texas (ERCOT) said the situation had grown more dire and that the anticipated duration of the planned outages had “been significantly extended” and could last up to several hours.

Meanwhile, utilities to the east were on alert for their own winter onslaughts, winter weather advisories were posted from Louisiana to New England with ice storm warnings in effect at midday Monday in parts of Georgia, West Virginia, Kentucky, Ohio and New Jersey.

Texans were urged to turn down their thermostats and avoid using major appliances. In fact, AEP Texas advised customers to completely shut off heaters and appliances and turn them back on gradually over an hour. “Taking this step will help prevent a sudden surge in demand after power is restored, which could cause a second outage,” the utility said in a release.

About 10,500 megawatts (MW) of customer load had been shed as of Monday morning, which ERCOT said equaled enough power to serve approximately two million homes. More than 30,000 MW of generation was offline due to the brutal weather, which included sub-zero wind chills in some areas of the Lone Star State. The sidelined generators included a number of wind turbines stalled by ice, and natural gas wellheads forced to shut down due to freezing liquids.

“This record cold is not only compelling customers to increase their power usage to stay warm, it’s also icing wind turbines and straining our natural-gas powered resources,” said Commissioner Arthur D’Andrea at the Texas Public Utility Commission. “With the grid pinched like that, ‘demand response’ in the form of reduced consumption is an essential shared action.”

The Midcontinent Independent System Operator (MISO), which oversees the regional grid in southeast Texas, said the supply situation had been a concern since the storm developed last week and had finally reached a critical point. “The accelerated change in conditions led us to our last resort in order to maintain grid reliability and we are in direct communication with our members to support their restoration efforts in the affected areas,” said Renuka Chatterjee, Executive Director, System Operations at MISO.

At Entergy Texas, crews have taken proactive steps to prepare and protect the company’s electric assets from the extreme cold as well as placed additional power generation into service. Due to the bitterly cold temperatures, the demand for electricity has reached an all-time high, the company said.

“We are working to respond and restore power as soon as it is safely possible,” Stuart Barrett, vice president of customer service at Entergy Texas, said on Monday. “While our crews worked to prepare for this storm, a loss of generation combined with the peak load has caused a strain on the system. As a result, we are short of the power needed to meet our customers’ demands across southeast Texas.”