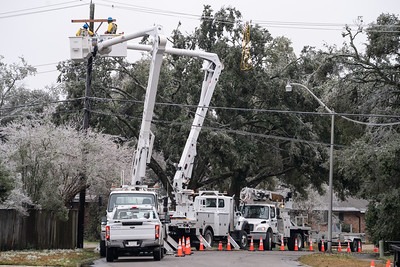 The electric industry is weighing in on how best to build a more resilient grid as historic winter storms hamper the electricity generating and delivery system in Texas and other states, with experts saying new investments in infrastructure are needed to decrease the risk of outages in the future.

“We need infrastructure that strengthens the grid as a platform, an interconnected machine,” said Scott Aaronson, vice president of Security and Preparedness for the Edison Electric Institute (EEI), the association representing all U.S. investor-owned electric companies.

With more than two million Texans still without power in arctic weather, and questions on the timing of a return to normalcy, future electric sector investments and policies are critical for preventing future disasters, not just in Texas but across the nation.

Arshad Mansoor, president and CEO of the Electric Power Research Institute (EPRI), said that “broader interconnection through new transmission will increase access to diverse resources and fuel supplies and is a critical piece of a resilient grid that accommodates more low-carbon resources.” Mansoor said these kinds of upgrades will make the grid more resilient, i.e., having the ability to withstand extreme events, not just from weather but from terrorism and physical attacks.

This raises questions about the degree of resilience that regulators might demand. Because of costs, for example, it likely doesn’t make sense to require Texas operators to winterize to the same extent as utilities and transmission operators in say, Minnesota. Aaronson said post-crisis evaluations will likely set new requirements, but these still have to be kept in balance and within a larger context of efficiency and affordability.

Aaronson said going forward, “we need to determine the right level of resilience.” There needs to be broader discussion about the metrics to make new demands. Should they be based on data from every decade or from a 50-year rolling average?

“My view of resilience,” he said, “is don’t put all your eggs in one basket. We need a mixed, variable fuel-energy strategy.”

When asked if those significant changes were taking place, Aaronson noted each electric region is a little different. The critical point, he emphasized, “is in order to reach resilience and carbon reduction goals we need an all-of-the-above energy-fuel strategy – then you’ll get the goals you want.”

Mansoor likewise references broad energy reliance. “Our existing grid supply and delivery assets,” he writes, “must be hardened for climate change scenarios regardless of generation—renewables and fossil fuels.”

In a Feb. 17 paper on the winter electric reliability event in the south-central U.S. from Grid Strategies LLC, the authors conclude that all Texas energy sources were affected and that gas failures from freezing infrastructure played a much larger role than renewable outages. Texas gas supplies were reduced by 7 Bcf/day, nearly 1/3 of 2019 production.

“Renewable performance has been around the levels planned for,” wrote Vice President Michael Goggin and President Rob Gramlich of Grid Strategies. Around 20 gigawatts of wind and solar capacity was offline, likely mostly due to icing events at wind plants. Many Texas wind plants are not outfitted with anti-icing blade heaters, equipment used in colder climates, but not considered necessary in southern states.

Like Aaronson, Goggin and Gramlich emphasize that “transmission increases resilience by accessing diverse resources.” Their reference is to a huge, national grid, citing research from federal and academic labs about the benefits if the eastern, western, and Electric Reliability Council of Texas (ERCOT) grids were combined. The east and west coasts had plenty of power. They write: “A national transmission system could have prevented the outages in the Central U.S. by utilizing spare generating capacity from regions that were less affected by the extreme cold.”

Their paper also notes that prudent capacity planning could protect against future extreme cold conditions. They cite the value of “generation diversity” and that “being overly dependent on any one isn’t wise.” Transmission plays a critical role in enabling that diversity.

Meanwhile, energy experts predict the continuation of extreme weather events such as ice storms, hurricanes and wildfires due to climate change.

According to Corey Capasso, CEO of Urbint, energy infrastructure risk is at an all-time high for a variety of factors: the sheer amount and varying ages of infrastructure, workforce turnover, regulation stumbles, and COVID-19. Urbint is a company that utilizes A.I. to assist utilities and infrastructure operators in better planning and resilience, and Capasso believes one of the most important things that can transform safety and risk is technology.

“Certain areas of the country have been more conservative in relation to storm hardening and infrastructure upgrades. Now they have to realize they may be more susceptible than they once thought. We need their programs to accelerate,” Capasso said.

How electric utilities look at capital investments will be key. Many of those plans are approved years in advance, Capasso pointed out, so they need to examine them and see if, knowing what we know now, those plans still make sense for the future.

Cooperation will also be key.

“The great thing about utilities is they all believe in safety and mitigating risk, and most work toward standardization,” Capasso said. “Right now though, it’s clear we’re in uncharted territory. We all need to get our heads together at the industry level, the government level, and standardize some of the best approaches here.”