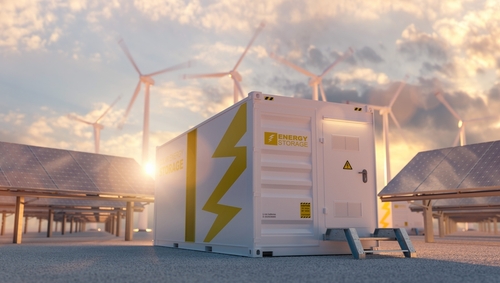 The company said that the battery storage system was installed to increase reliability for PUD’s 5,000 customers during peak electricity demand days.

“I am proud to announce that Rhode Island continues its leadership on clean energy innovation by installing the state’s first utility-scale battery storage system,” McKee said. “This battery technology, which allows for the storage of energy and deploys it when it is most needed, is a vital link in our state’s transition to a 100 percent clean electricity grid by 2033. Pascoag is setting a great example for others to follow.”

Battery storage saves energy generated by renewable energy, such as solar or wind, to provide power when the sun is not shining, or the wind is not blowing. Battery storage makes it possible to use the energy during peak electricity demand ties, such as during hot summer days or when commuters return home at night and power up appliances or electronic devices.

“Rhode Island deserves energy that relies on our state’s natural beauty, not energy that destroys it. These new batteries are a step towards ensuring that every community, from Pascoag to Providence, has access to clean, green energy,” Lt. Gov. Sabina Matos said. “I’m hopeful that we can continue leveraging our state’s resources to build a more resilient and renewable power grid.”

The company said battery storage installed on the grid, like the ones installed by PUD, may lower congestion and decrease stress on the electrical grid by managing the amount of electricity on the grid at one time. This reduces the need to install or upgrade poles and wires to meet an area’s growing demand, the company said.

The battery storage project was partly funded by a $250,000 grant from OER. Other work for a PUD substation was funded by a $1.4 million loan from the Rhode Island Infrastructure Bank, approved by OER through the state’s Efficient Building Fund program. Installing the battery system saved PUD up to $12 million in grid infrastructure upgrades, the company said.