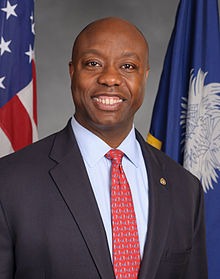 The nuclear PTC was intended to encourage investment in advanced nuclear projects through public-private partnership. According to Scott, this joint ownership causes the tax credit to be shared inefficiently between the private partners and the public partners and ultimately leads to an imbalance in the benefit ratepayers could obtain in the form of cheaper electricity.

This bill would remedy this discrepancy and ensure that nuclear PTC works for both the public and private entities as it was originally intended.

“This is a more responsible and efficient way to deliver the incentives Congress created to construct new, clean nuclear power through public-private partnerships,” Scott said. “South Carolina is leading the nation as a first mover in building advanced nuclear power facilities that help our energy sector to meet the needs and challenges of our state’s 21st century manufacturing economy. Most importantly, it will be a positive change that will benefit millions of South Carolina residents.”

“Other energy technologies are able to effectively use their credits with public-private partnerships and nuclear energy should have the same consideration,” Rice said. “This bill helps to correct a disparity of current law so savings can be passed onto consumers in South Carolina, the southeast, and across the country who deserve affordable, reliable energy.”